In 1970, Tilson Thomas recorded a series of spring concerts with the BSO - and this DVD features titles from that period.

The Sibelius and Wagner works were recorded two months later, on March 10; they are found nowhere else in the conductor's discography, so their inclusion alone would give this DVD its historical value. The performances aren't quite as convincing as the Ives, but the Sibelius has plenty of dark drama, thanks partly to Tilson Thomas's urgent conducting style and partly to some reinforcements to the composer's scoring. (I count eight horns in the orchestra; Sibelius calls for four.) There are exquisite solos from principal cello Jules Eskin and principal flute Doriot Anthony Dwyer. The Wagner is lean and exciting, though the performance of Schoenberg's "Five Pieces for Orchestra," which preceded it on the program, might have been of even greater historical value. (It was apparently not recorded for broadcast by WGBH-TV.) This is nevertheless an important document of the early stages of a crucial Boston partnership. 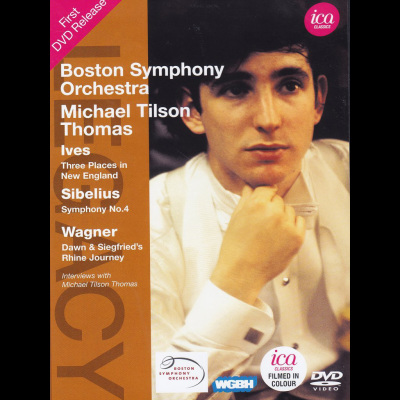 Thomas is a champion of Ives and conducts Three Places in New England in a concert recorded at Symphony Hall in Boston on January 13, 1970. The second piece featured is Sibelius’ Symphony No. 4 and finally a March 10, 1970 performance of Wagner’s “Dawn & Siegfried’s Rhine Journey”. This DVD also features an exclusive interview with Michael Tilson Thomas. This is the first release of this material on DVD.