John Tavener doesn't see himself as an historicist so much as in pursuit of the 'one simple memory' from which all art derives - looking back to a supposed pre-secular existence when art, life and spirit were more closely integrated than they might seem now. 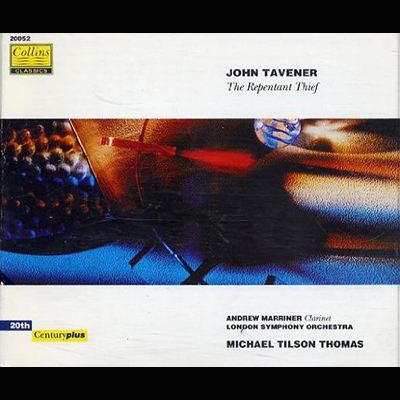 Out of that pursuit comes The Repentant Thief, completed in May 1990 as (the composer’s words) ‘a shorter, simple and rather primitive piece’ after the exertion of two large scale works: a dramatic oratorio Resurrection and an opera (his second) Mary of Egypt. The thief of the title is one of the criminals crucified with Jesus on Golgotha who, according to the gospel of St Luke asks: ‘Remember me when you come into your kingdom’, and is told ‘Today you will be with me in Paradise’.

Tavener’s piece is a response to the idea of that progress to Paradise, with the thief understood as a sort of holy fool – what Russian Orthodoxy calls a ‘Yurodivy’ – dancing blindly towards salvation. The orchestration is for a small group of strings, divided into up to fourteen parts, with percussion (including a prominent role for handbells) and a solo clarinet which, as Tavener puts it, ‘leads the Dance and the Lament, apparently going nowhere: the human paradox as I perceive it musically, leading to the End Point’.

In purely musical terms it describes something like a rondo structure, built around a rising triadic motif, sometimes minor sometimes major, heard at the outset on the clarinet (and doubled by a solo cello, using longer note values) that recurs at intervals throughout the piece. Between the triad statements come rhythmically irregular dance sections for the whole ensemble -which is nonetheless cast in terms of such chamber intimacy that the composer recommends it to play not with a conventional conductor but with a ‘director’ who sits on the same level as the players, with the clarinet and handbells to his right and left.

The chamber scale of statement is one reason why it doesn’t quite amount to a concerto; and another is the treatment of the clarinet which, like the solo cello in an earlier quasi-concerto work The Protecting Veil, is more integrated into the ensemble than set up in conflict with it. But, again like The Protecting Veil there is no doubting where the focus of musical interest lies, and Tavener is clear about the kind of personality he wants the clarinet to project. He wants the peasant-rustic sound of Greek folk woodwind, and goes so far as to suggest using it- ‘if available’ – in future performances for some of the dance sections, alternating with a standard B flat concert instrument.