Bernstein: On The Town

Michael Tilson Thomas leads the London Symphony Orchestra and an all-star, crossover cast of opera and theater performers in a semi-staged concert version produced by Deutsche Grammophon and recorded for both CD and video release. Participants include Frederica von Stade, Thomas Hampson, Tyne Daly, Cleo Laine, David Garrison, Samuel Ramey, and, as both narrators and performers, Comden and Green themselves. The resulting recordings included material cut at various stages of the musical's development. Thomas revived this concert edition of the work in 1996 with the San Francisco Symphony, with many of the same performers.

Three sailors on shore leave chasing after women in the Big City--that's the premise for On the Town, the brilliant, innovative, and electrically vibrant 1944 show by Leonard Bernstein (and Jerome Robbins, Adolph Green, and Betty Comden) that literally overflows with great songs and dance music. This version features a strong cast and three numbers cut from the New York premiere. It's well worth a visit. 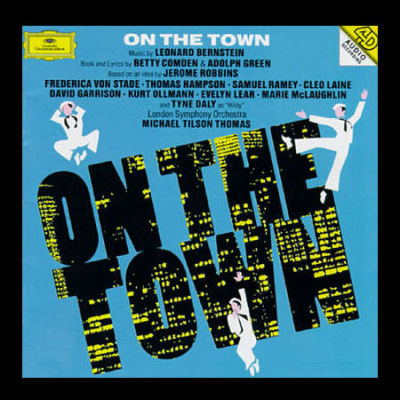 On the Town is a musical with music by Leonard Bernstein and book and lyrics by Betty Comden and Adolph Green, based on Jerome Robbins’ idea for his 1944 ballet Fancy Free, which he had set to Bernstein’s music. The musical introduced several popular and classic songs, among them “New York, New York”, “Lonely Town”, “I Can Cook, Too” (for which Bernstein also wrote the lyrics), and “Some Other Time”. The story concerns three American sailors on a 24-hour shore leave in New York City during wartime 1944. Each of the three sailors meets and quickly connects with a woman.

On the Town was first produced on Broadway in 1944 and was made into a film in 1949, although the film replaced all but three of the original Broadway songs with Hollywood-written substitutes. The show has enjoyed a number of major revivals. The musical integrates dance into its storytelling: Robbins made a number of ballets and extended dance sequences for the show, including the “Imaginary Coney Island” ballet.