Michael Tilson Thomas's Gershwin credentials are second to none, and include several recording premieres, most notably the first modern version of the original jazz band orchestration of Rhapsody in Blue (for Sony/Columbia). This new double-CD set offers an impressive selection of Gershwin favorites and rarities: the Second Rhapsody, with Tilson Thomas himself at the piano; An American in Paris; the Concerto in F, this time with Garrick Ohlssohn as soloist; and finally, Gershwin's own Catfish Row suite from Porgy and Bess, here fleshed out with the best and most popular songs from the opera, ably sung by Audra McDonald and Brian Stokes Mitchell. As a tribute to America's most popular composer, these swinging, idiomatic performances are irresistible. 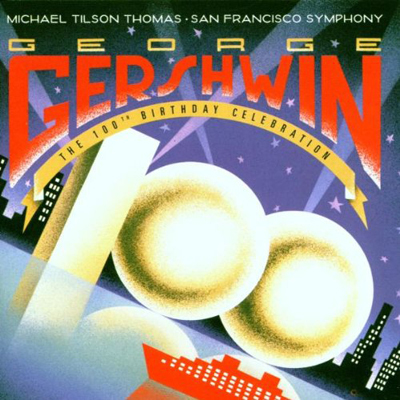 The San Francisco Symphony Orchestra’s celebration of George Gershwin’s centenary takes the form of a two-CD set culled from two performances, comprising four separate pieces. The most impressive is the first, an extended version of “Catfish Row Suite,” Gershwin’s orchestral treatment of themes from Porgy and Bess (so titled to avoid confusion with Robert Russell Bennett’s Porgy and Bess suite), with interpolations of several songs from the opera, sung by Broadway stars Audra McDonald and Brian Stokes Mitchell. Both singers are well suited to the material, and Mitchell in particular gets into the different parts; it’s hard to believe the singer on “Bess, You Is My Woman Now” and “There’s a Boat Dat’s Leavin’ Soon” is the same person. Purists may question the performance of the “Second Rhapsody” that follows, featuring conductor Michael Tilson Thomas on piano, since, as annotator David Wright puts it, “Following the precedent that was hinted at in Gershwin’s own recorded rehearsals of the work, Mr. Tilson Thomas has inserted a cadenza he has written in the Gershwin style.” Of course, there are different ways to approach this material, and if there were any doubt about that, it is dispelled in the orchestra’s relatively calm reading of “An American in Paris”; Tilson Thomas’ American is a leisurely tourist. Garrick Ohlsson sparks the orchestra with his piano playing on the “Concerto in F,” which concludes the album, bringing things almost up to the standard of the “Catfish Row Suite.” Recording Dates: July 2, 1997 & June 30, 1998