This disc received Gramophone magazine's "Recording of the Month" award for December 1998.

One of the activities for which Michael Tilson Thomas has an especially strong passion is cultivating the traditions of great ensemble playing within the next generation of young musicians. In his work with the New World Symphony--a training orchestra for gifted conservatory graduates from around the world, which he founded in 1987--MTT has clearly inherited the mantle of inspiring educator from Leonard Bernstein. He similarly works along the popular-classical divide so prevalent in American culture--not as a dead end but a source of creative energy.

This disc showcases the vitality of orchestral jazz in various guises as it straddles that divide, from the music of American composers and European émigrés to Hollywood film scores. One of the things MTT demonstrates with the selections here--eminently incarnated by the ensemble, which has a huge sense of fun with it--is the amazing malleability and assimilibility of jazz elements, whether it's the spiky rhythmic fragments that get blown to oversize in John Adams's Lollapalooza or the brashly outrageous brass yawpings of Bernstein's Prelude, Fugue, and Riffs (demonstrating the composer's own belief in a shared sensibility linking baroque improvisatory counterpoint with jazz). One of the real treats here is the account of Rhapsody in Blue in its first, seldom-heard version (as orchestrated by Ferde Grofé for a '20s jazz band). This is one of the freshest, most absorbingly joyful versions of the Gershwin available, full of colors you will have likely never encountered, with an exuberantly inventive MTT at the keyboard. The stardust saxophone sound in Rhapsody's slow dance tune alone is worth the price of admission. 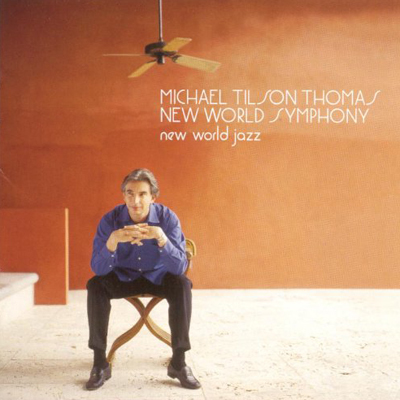 Conductor Michael Tilson Thomas founded the New World Symphony in 1987 as a training orchestra for young musicians–beyond college orchestras, there is little else to prepare players for the rigor and routine of orchestral careers. The program, which offers three-year fellowships, has had great success and produced both players for the top orchestras in the U.S. and recordings of a level to rival those orchestras. The primary difference between their recordings and those of “major” orchestras is the repertoire: NWS’s previous recordings have focused on Heitor Villa-Lobos, Paul Schoenfield and Ingolf Dahl.

New World Jazz presents jazzy and jazz-influenced works by eight European and American composers. Some, like George Gershwin, are known for their “popular” works; others, like Leonard Bernstein and John Adams, are well-known for fusing elements of American vernacular styles and harmonies into their “classical” works. Beyond Rhapsody in Blue the works are a bit off the beaten path, and the program is entirely rewarding. To close the disc, MTT stepped further off the path to Hollywood for David Raksin’s theme from “The Bad and the Beautiful,” and his young players pour themselves into this lush example of 1950s film music.