Here's a Stravinsky set to raise eyebrows. Where is Petrouchka, the standard coupling for Firebird and Rite in collections of the great early Stravinsky ballet scores? Instead, we get the too rarely heard Perséphone, and it's the highlight of the set. Premiered in 1934 to a text by André Gide, Perséphone is a retelling of the Greek fertility myth of the earth's winter death and spring renewal. The tale drew from Stravinsky some of his most delicate and beautiful music in the neoclassical style of the period, a sibling to the ballets Apollo and Orpheus and the cantata Oedipus Rex (it also includes string figures that recall those works).

Stephanie Cosserat, in the title role, is a youthfully persuasive narrator, very different from Vera Zorina's oracular reciter on Stravinsky's own recording. Stuart Neill's tenor is a big plus, and the orchestra and chorus play and sing with involvement. Michael Tilson Thomas brings out the cool tenderness of the score, and the recording, made at a live performance, is truthful. His Firebird is lushly dramatic, and the Rite's barbaric thrust is leavened by some soulful wind playing. Recorded competition in the two ballets is fierce (along with Gergiev's recent Firebird on Philips, there are classic versions by Ansermet, Dorati, Haitink, and others, including the composer) but Perséphone makes this set an attractive proposition. 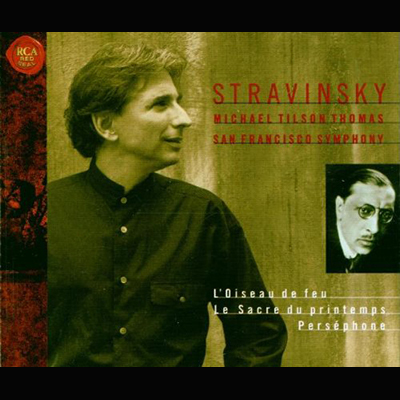 This CD includes The Firebird, a ballet based on Russian fairy tales of the magical glowing bird that can be both a blessing and a curse to its owner, The Rite of Spring, a ballet and orchestral concert work and Perséphone, a musical work for speaker, solo singers, chorus, dancers and orchestra.