There is no doubt that Michael Tilson Thomas’s approach matches Tchaikovsky’s sub-title. The freshness of the opening […] is matched by the poetic feeling of the slow movement, the opening superbly atmospheric. As shaped by Thomas the main tune shows a haunting Russian melancholy which catches the music’s spirit to great effect. 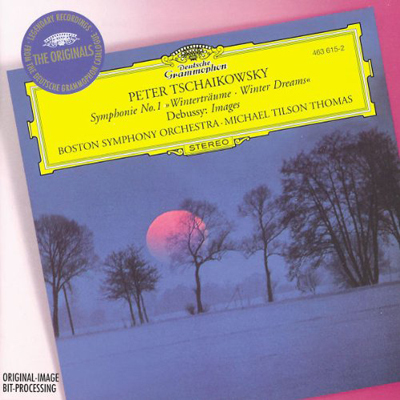 I. Dreams of a Winter Journey. Allegro Tranquillo (G minor)

II. Land of Desolation, Land of Mists. Adagio cantabile ma non tanto (E-flat major)
This movement has an essentially monothematic structure, based on subtle gradations and variations on a single melody.

III. Scherzo. Allegro scherzando giocoso (C minor)
This was the earliest movement to be written. Salvaged from the third movement of a piano sonata that he had written as a student, Tchaikovsky transposed the movement down a semitone to C minor and replaced the trio with the first of a whole line of orchestral waltzes.

IV. Finale. Andante lugubre (G Minor) – Allegro maestoso (G Major)
Tchaikovsky uses the folk-song “Распашу ли я млада, младeшенка” (Raspashu li ya mlada, mladeshenka) as the basis for both the introduction and the second subject (in B minor). This song also colors the vigorous first subject. Tchaikovsky had borrowed the folk-song motive into the prelude and the finale of his Cantata for the Opening of the Polytechnic Exhibition in Moscow 1872 (commemorating the bicentenary of the birth of Peter the Great). Tchaikovsky, in the recapitulation, restates the movement’s introduction, instead of the secondary theme. The movement ends with a vigorous coda.

I. Gigues (1909–1912)
The original title of Gigues was Gigues tristes. Debussy used his memories of England as inspiration for the music, in addition to the song “Dansons la gigue” by Charles Bordes the Tyneside folk tune “The Keel Row”.

II. Ibéria (1905–1908)
Ibéria is the most popular of the three orchestral Images and itself forms a triptych within a triptych. The three sections of Ibéria are:

Par les rues et par les chemins (“Through the streets and the paths”) – inspired by rondo form
Les parfums de la nuit (“The fragrance of the night”) – the atmosphere of a fascinating Spanish night
Le matin d’un jour de fête (“The morning of a festival day”) – a procession of a ‘banda de guitarras’.
The music is inspired by impressions of Spain. Richard Langham Smith has commented on Debussy’s own wish to incorporate ideas of juxtaposing elements of the visual arts in musical terms, including a quote from Debussy to Caplet from a letter of 26 February 1910:

Matthew Brown has briefly commented on Debussy’s use of techniques such as incomplete progressions, parenthetical episodes and interpolations in Ibéria.

III. Rondes de printemps (“Round dances of spring”) (1905–1909)[edit]
This is one of Debussy’s most modern works. He used two folk tunes, “Nous n’irons plus au bois” and “Do, do l’enfant do” in this movement. Brown, Dempster and Headlam have analyzed the tonal structure of this movement. The first song plays a prominent role from the start of the 15/8 time until the end of the movement, in the solos and in the accompaniments and countermelodies. Debussy had already quoted the song “Nous n’irons plus au bois” in Images oubliées of 1894 for piano and in Jardins sous la pluie from Estampes (1903).