Robin Holloway (b. 1943) is one of England's brighter lights in contemporary classical music who has managed to walk the fine line between romanticism and modernism without thumbing his nose at either along the way.

Holloway's music is assertively atonal and if you are familiar with the music of Tippett, Rawsthorne, or Hoddinott you will take very well to this music. The Third Concerto for Orchestra is very recent--composed in 1994. It's atonal but not serial; textural rather than thematic. It's a true concerto for orchestra in that every instrument (and every instrument combination) gets a turn at bat and is, all the while, intellectually riveting. Clearly, the concerto for orchestra is a more adaptive format for Holloway's ideas than, say, the symphony and the performance of the LSO in first-rate. 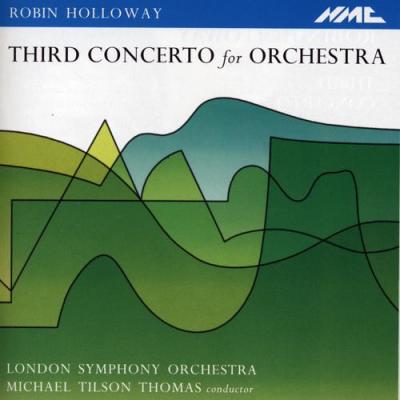 “This piece was conceived ‘on the spot’ like an artist sketching, during a few weeks’ voyaging in South America, early in 1981. These instant sound pictures began almost at once to tend towards an overall plan. But this is difficult to reconstruct, since the bag containing all the jottings was stolen in La Paz and never recovered. And of course it proved impossible to remember notations made in the immediate presence of such vivid sights. The enforced ‘recollection in tranquillity’ over the 13 years of composition has surely changed them into something completely different.

During the long slow bus journey on from La Paz, I sketched out as much as I could retrieve of the overall shape. This journey also provided the inspiration for a further panel, in the wonderful blue of Lake Titicaca, the highest lake on earth, called by the Indians ‘the world’s navel’. The other panels are, in order of my encountering them, the flotilla of boats, bands, bells and booming sirens in the Bay of Bahia celebrating New Year’s Day, which gets into my finale; the four-day crossing by slow train (known as ‘the train of death’) of the Great Brazilian Swamp, which makes my first movement; and the unforgettably impressive sight, sound and mental impact of the Silver Mountain at Potosì, which makes my second.

The feature of the Great Swamp is its featurelessness – endless stagnating mud and vegetation, flights of birds, glitter of light on the still waters; and the only exception to the flatness, three strikingly different rock formations, rearing up out of the quagmire like something in a dream. The sight at Potosì was one of the most stirring I’ve ever seen. It was not beautiful; in fact it was an image of baleful ugliness, malign in its powerful suggestion of the perversion and exploitation of nature – the hill of treasure, like a gigantic slag heap, infernally active, sweating silver, excreting its wastes both liquid and solid, vomiting men in cages from deep within belly and bowels. Then came the high radiant lake, ‘navel of the world’; and finally the festivities on land and sea with every possible sound-source (including circulating helicopters) filling a vast hemispherical space with celebration and noise.

I was wildly excited by all four fused sound-images, and devastated by the loss of the spontaneous musical reactions, which were detailed and specific. At a loss literally as to how to write the piece without them. I knew it wanted to be a sizeable Concerto for Orchestra, following on from its predecessor which had received its first performance rather over a year before and was still ringing in my ears. But commissions for these don’t arrive every day; it was only in 1990 or so that the go-ahead came from the London Symphony Orchestra which caused me to pick up the tread and resume work which up till then had been desultory at best, at worst despairing. The work was completed at last in 1994.

And now that it is completed, I see that the delay could well have been advantageous. What I was trying for ‘on the spot’ was probably unrealisable (even with the gigantic orchestral forces – a southern hemisphere Amériques – that I had in mind). And it would probably have been too directly descriptive – too close, too dependent on the sensory inspiration. During the long years of recovering the theft, grinding away at material whose ungraspableness defeated the efforts again and again, the visual, metaphorical and even moral connotations have distanced, condensed and grown abstract. They are certainly still present – indeed, the surprise of this first performance is how immediately sensuous so much of the music remains. But such connotations are now fused into the purely musical workings, which are entirely their own subject, remorseless and implacable. The material is simplicity itself – the major third, in isolation and when piled upon itself to make a major/minor triad. Through the results can become extremely complex, the departure-point is as basic as this. Virtually nothing else is permitted; the piece is athematic, concerned only with organising its shifting textures into different kinds of momentum, journey, arrival. But of course the musical result of this deliberate renunciation of explicit scene-painting is charged with the force of the images that inspired it, and all their subsequent metaphorical ramifications.

The first movement is a sort of Prelude. The opening bars give a sound-glimpse of everything that is to be developed later, here buried in sluggish torpor. The rest of the movement begins to let it expand in a succession of textural contrasts. At their maximum density the three distinct rock-shapes stand out before the movement melts away.

They contain, locked tight, the substance of the second movement, Chaconne. Rather than a bass or a chord sequence, this is built upon a row of six musical ‘things’ – intervallic, timbral, tuned or unpitched percussion, and sometimes including a silence. This row is stated twice, slightly but significantly different, with complete nudity. The 42 ‘variations’ that follow are for their first two cycles sectional, featuring the orchestral choirs in the order exposed in the row – brass, woodwind, strings, percussion – with occasional tuttis. Motifs and textures from the first movement drift over; but only gradually as the music gathers speed and the scoring becomes fuller does it emerge that the whole thing is a horizontalisation of what in the first movement was vertical. An interim climax reaches a broad phrase of stolid dance-rhythm (already present in the piece’s very opening bars) that will eventually make the entire substance of the finale. But the real climax comes later, with the Chaconne’s constituents stacked up and grinding away in a pulverising search for issue.

The tension resolves obliquely into the shining lake of the third movement, which begins in bell-sounds alternating with free-floating cadenzas for the flutes, the clarinets, then the oboes, then the bassoons. (It is meant to be a concerto for orchestra!). The speed broadens to end the movement in a lyricised return of the three shapes from movement one – rock into water. After this the music sinks back into the primal swamp where it had begun.

But this time the seeds of the fourth movement, Finale, begin to sprout. It is a gradual accumulation on the slow-ish dance motif already heard, endlessly repeated in ever-expanding terraces of sound that build, peak, decline, disolve, and start all over again. The second tier gathers in music from movement three. The next, also mixing in elements from movements two and one, is driven to a threefold conclusion: the first falls below the right notes; the second (after a massive return of the work’s distant, soft opening) goes too high. After a silence, the Coda builds steadily up to the exact goal.”