...this is quite some journey. It lasts 65 minutes and one lifetime. If anyone has a hot­line to the cortex of Ives’s imagination, it is Michael Tilson Thomas. The programme he has devised here is not so much a journey, more a stream of consciousness through the hinterlands of Ives Americana... Hard to believe that this is a live recording, so astonishingly lucid and transparent is the multi­layered orchestral sound. Tremendous impact, too. 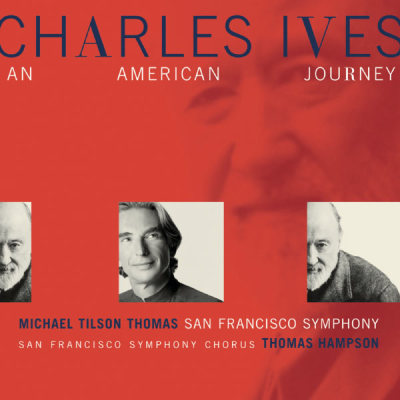 Michael Tilson Thomas always is worth hearing when he conducts Ives, and this disc is no exception. He recorded Three Places in New England for DG with the Boston Symphony, and that version (recently reissued on DG Originals) remains one of the finest available. For his new recording he has a unison chorus singing the words of “The Housatonic at Stockbridge”, a fact made possible by Ives including a texted version of the piece in the collection he published privately as 114 Songs. Personally, I find it a pointless and unnecessary gimmick, but there’s no denying that MTT conducts with his customary mastery, and Putnam’s Camp, with its two brass bands crashing into one another, certainly ends with the necessary bang.

The remainder of this collection includes a series of songs and orchestral movements, the most important of which is “General William Booth Enters Into Heaven”, one of Ives’ very greatest vocal works, here sung beautifully and idiomatically by Thomas Hampson, who projects his other numbers (including Memories and the hilarious Charlie Rutlage in Ives’ own version for voice and orchestra) equally well. Aptly “cosmic”, atmospheric performances of “The Unanswered Question” and “From the Steeples and Mountains” round out the program, though the inclusion of the third-movement fugue from the Fourth Symphony all by itself seems a bit strange. Fine sound, a bit light at the lower end, completes a very compelling overall picture.