There's no pretending that the two-piano version even approaches the orchestral original in terms of excitement and innovation, but the music's skeleton is fascinating enough (and very much alive), and there's a different kind of excitement involved in hearing two pianists conquer difficulties normally faced by a hundred orchestral musicians. Tilson Thomas and Grierson are up to the challenge, although they don't make the listener forget the orchestral version. 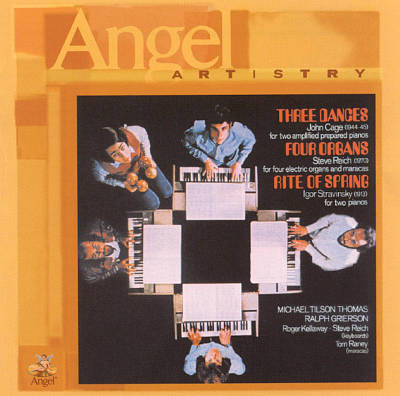 Stravinsky’s Rite of Spring exists in a reduction for two pianos for the convenience of choreographers; the composer never intended this reduction to be performed as a concert work, let alone recorded. Nevertheless, Stravinsky did not object to its performance, commenting, “Why not? I wrote it.” Apparently Tilson Thomas and Grierson were the first pianists to record this reduction (They performed the work together “live” as early as 1967). Since then, many other pianists have followed suit.