This set's recordings have been awarded a combined 7 Grammy® Awards.

The recording of the early oratio Das klagende Lied that Michael Tilson Thomas and the orchestra made in 1997 for RCA Victor has been remastered and reissued, and it sounds even more vibrant and dramatically charged than it did a decade ago. The orchestral effects that the 20-year-old composer would later use to more persuasive use--all those marches and trumpet fanfares--come through beautifully. 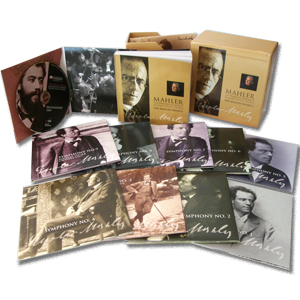 As an added bonus, this set includes a never before released special bonus recording of the Rückert-Lieder for piano and voice with MTT on piano and Susan Graham, mezzo-soprano.

Michael Tilson Thomas is among today’s foremost interpreters of Mahler, and critic Mark Swed, writing in the Los Angeles Times, has called MTT and the San Francisco Symphony “the most exciting Mahler combination anywhere right now.”

The SFS and MTT present Mahler’s Symphony No. 1, their second recording of the complete Mahler Symphony cycle. This powerful and passionate performance of Mahler’s “Titan” follows the universally acclaimed recording of Mahler’s Symphony No. 6, which topped the Billboard classical chart within the first week of its release. Recorded during the SFS concerts of September 19-23, 2001, this newest addition to the Mahler cycle captures the live-performance excitement of the Grammy-winning conductor-symphony partnership that the Los Angeles Times has declared “the most exciting Mahler combination anywhere right now.”

The massive Second Symphony takes us into epic territory. Often called the Resurrection Symphony, this vast work begins in purgatorial terror and moves through the gamut of emotions, to a visionary choral finale in which the heavens open. In addition to the Orchestra, the SFS recording of this overwhelming work features the San Francisco Symphony Chorus, soprano Isabel Bayrakdarian, and mezzo-soprano Lorraine Hunt Lieberson.

Mahler: Symphony No. 3 and Kindertotenlieder (2-Disc)

The SFS and MTT present Mahler Symphony No. 3 and Kindertotenlieder, the third installment of the SFS/MTT Mahler cycle. The Mahler Third, is the most expansive of the composer’s symphonies. There are moments of angst here, but the overwhelming message is of love’s redeeming power, and the peaks this great work scales are some of the most glorious in all music. The Mahler Third features mezzo-soprano Michelle DeYoung, Women of the SFS Chorus, the Pacific Boychoir and the San Francisco Girls Chorus. Also included in this two-disc set is a recording of Mahler’s heartbreaking Kindertotenlieder, with Michelle DeYoung.

The SFS and MTT present Mahler’s Symphony No. 4, recorded live at Davies Symphony Hall in the concerts of September 24-28, 2003. Mahler’s Fourth is the most tuneful and upbeat of his symphonies. Its gloriously expansive slow movement offers a picture of heavenly terrain and its vocal finale, with soprano Laura Claycomb, is as freshly innocent as a folk tune.

Mahler’s Fifth Symphony is all about action. It’s his breakthrough work–a “foaming, roaring, raging sea of sound,” he called it, a work of “dancing stars.” The famed Adagietto was inspired by Mahler’s love for his young wife Alma. Hear Mahler 5 recorded live by the SFS and MTT, the partnership that the Los Angeles Times calls “the most exciting Mahler combination anywhere right now.”

The SFS and MTT present their first recording of the complete Mahler Symphony cycle. Each of Mahler’s nine symphonies is a drama, and Michael Tilson Thomas is among the foremost interpreters of these episodes. Last fall, the SFS and MTT began their five-season project of recording all the Mahler Symphonies and the Adagio from the unfinished Tenth, live. The first installment is Symphony No. 6. Sometimes called the “Tragic” Symphony, the Sixth shows Mahler at his most devastating, and many think of this music, first heard in 1906, as a prophecy of the horrors of the century to come. This recording was made at the SFS concerts of September 12-15, 2001, immediately following the events of September 11 and captures a passionate response to that day.

The San Francisco Symphony (SFS) and its Music Director Michael Tilson Thomas’ (MTT) live concert recording of Gustav Mahler’s Symphony No. 7 has won two Grammy® Awards in the categories of Best Classical Album and Best Orchestral Performance. Recorded live at Davies Symphony Hall, the Seventh is Mahler at his most mysterious. Sometimes called “Song of the Night,” the work has a tantalizing nocturnal quality, evident in two “Nachtmusik” movements and the sonic cascades of the opening, inspired by an evening boat ride on an alpine lake. This is Mahler’s ultimate challenge to performers and a fascinating journey for listeners.

Mahler’s immense creation—featuring hundreds of musicians, three choruses, and soloists—is a symphony so epic in scope that it has been dubbed the “Symphony of A Thousand.” Mahler’s Eighth—a tale of damnation and salvation—is quintessentially a romantic work, but it owes a great debt to the towering Baroque choral works of J.S. Bach.

Recorded live at Davies Symphony Hall during the concerts on September 28 – October 4, 2004, Mahler’s last completed symphony covers territory from the amiable Austrian pastoral to the fury of its “Burleske” to the uninhibited baring, in the finale, of the unprotected heart. Michael Tilson Thomas has distinguished himself as one of the world’s foremost Mahler interpreters, and through his signature performances, as one of the composer’s most compelling advocates. In 1974, at the age of 29, he made his SFS debut conducting Mahler’s Symphony No. 9. Now celebrating his tenth season as Music Director, he and the SFS have formed an orchestral partnership acclaimed for innovation, artistic excellence, and a revitalization of the classical musical experience.

Mahler was a great symphonist and a great songwriter. In his “song-symphony” Das Lied von der Erde (“The Song of the Earth”), these two strands of his genius are intertwined. Here Mahler summons all his orchestral and vocal imagination, taking us to the heart of ancient Chinese poems that praise life’s joys and lament life’s brevity. Michael Tilson Thomas conducts the San Francisco Symphony, with tenor Stuart Skelton and world-renowned baritone Thomas Hampson.

Here is Mahler the enchanter. The selections from Des Knaben Wunderhorn are the composer’s take on folk tunes, playful and touching. The Songs of a Wayfarer (Lieder eines fahrenden Gesellen) tell of young love lost. And the Rückert settings are, in a word, gorgeous. Hear Susan Graham and Thomas Hampson, two of today’s great Mahler singers, as they join Michael Tilson Thomas and the San Francisco Symphony in this final album of the award-winning MTT/SFS Mahler cycle.