A highlight of the disc is Getty's six-part song cycle Young America, written in 2001.

The music has a kind of charming, late-Romantic appeal, spiced with some more modern harmonic touches. If you listen to the program straight through you notice that Getty relies on particular mannerisms, such as setting a line of poetry to an upward-rushing musical line, holding on a chord, then descending rapidly in a mirror image of the initial gesture. 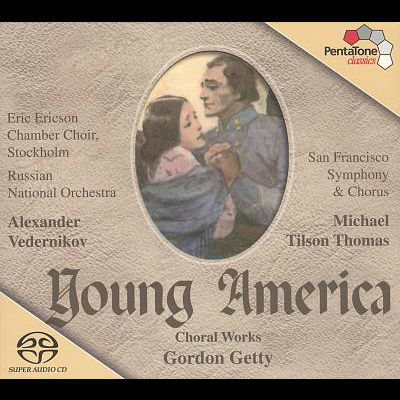 This hybrid SACD brings together the complete choral works Gordon Getty composed over a period of forty years, with the exception of Joan and the Bells. Gordon Getty writes in a nineteenth century (Victorian) idiom in which sentiments and ideals are central. The lyrics are from Victorian poets and old Welsh Folk Songs.

Most of Getty’s works get a world premiere recording on this disc in performances by the world-renowned San Francisco Symphony and Chorus with Michael Tilson Thomas and the impeccable Russian National Orchestra under the baton of Alexander Vedernikov. Gordon Getty’s music is inspired by composers from the Victorian era such as Wagner, Verdi, Mahler, Puccini and Strauss.