It’s hard to bring off this kind of populist mix without seeming to pander. But Michael Tilson Thomas has the breadth, depth, and showmanship to do it. 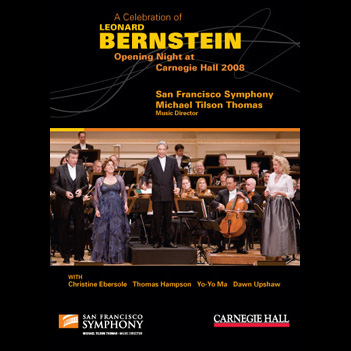 The Orchestra’s sold-out Carnegie Hall concert kicked off a New York City-wide tribute to composer Leonard Bernstein, who would have celebrated his 90th birthday this year. The 90-minute DVD, recorded in high definition and 5.1 surround sound, features music from a wide variety of Bernstein’s stage works, from such early triumphs as West Side Story and On the Town to later works Mass and A Quiet Place.