It’s hardly a surprise to SFS aficionados that MTT speaks cogently and flawlessly, with deep love for the music he is guiding to life. But the entire audio/visual gestalt, which treats the orchestra’s members as essential, articulate aspects of a collective creation, helps us delve deeper into the meaning beyond the notes. 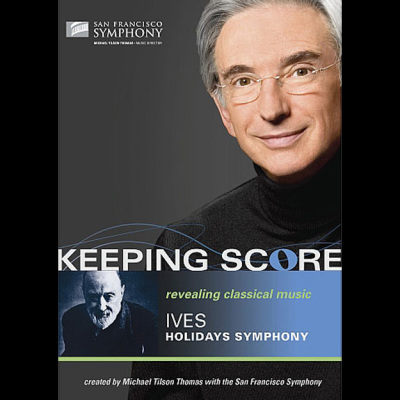 Ranging from tender sentiment to savage chaos, the music of early 20th-century composer Charles Ives explores an essentially American riddle: how can we survive the relentless assault of our own success? It was an enigma Ives embodied himself. He believed that we should all be brave enough to go it alone – yet he earned his living in insurance!

In this Keeping Score program, available on DVD or Blu-ray, Michael Tilson Thomas and the San Francisco Symphony unwrap the layers of Ives’s Holidays Symphony to reveal a surprising musical portrait of New England. The symphony’s four movements journey across the terrain of the seasons. From the intimacy of the winter hearth to the explosive concussion of the 4th of July, discover the insights Ives liberates in his music’s confrontational crunch.

Join Michael Tilson Thomas as he, the San Francisco Symphony, and Charles Ives belt it out over truth, beauty, and the American Way.