SFS Media's two-disc set includes the documentary accompanied by concert performances by the San Francisco Symphony including the first symphony, selected movements of the fifth, seventh and ninth symphonies and the complete "Songs of a Wayfarer" with baritone Thomas Hampson.

This Mahler: Keeping Score issue is special in several aspects. It consists of two extensive, perfectly produced presentations with Thomas as narrator, a journey through four Mahler works, and a complete live performance of Symphony No. 1. 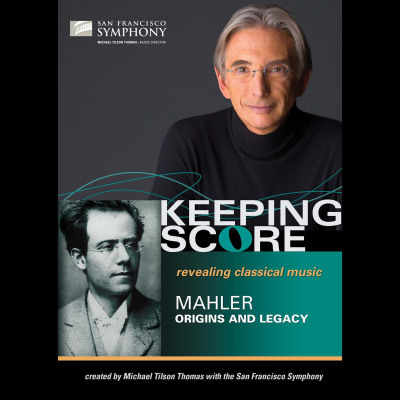 From the sounds outside his bedroom window a kind of sonic goulash of military marches, ethnic dance bands, church bells and nature itself Gustav Mahler created an entire universe of emotion in music. In an astonishingly productive 25 years, he fashioned ten symphonies and 45 songs of cosmic scale, great beauty and jarring emotional twists and turns. And he did it all in the brief moments he could spare from his day job as one of Europe’s preeminent conductors. On Gustav Mahler: Origins and Legacy, the latest release in the PBS Keeping Score series, Michael Tilson Thomas returns to the provincial Austro-Hungarian city of Mahler’s childhood and bears witness to his grand achievements, great sorrows and daring musical explorations into the depths of the human soul. Join MTT and the San Francisco Symphony as they trace Mahler’s rise as a young conductor, his career-crowning appointments in Vienna and New York, his turbulent marriage and the sudden, tragic death of his daughter and show how his stormy inner life inspired new and ever-more heartbreaking heights of creativity.

This two-DVD set features one disc containing two concert performances, with MTT leading the San Francisco Symphony in Mahler’s Symphony No. 1 and “A Mahler Journey,” and one disc with the 1 hour, 53-minute theatrical version of the documentary, which encompasses both the Origins and Legacy segments. Both the documentary and the concert performances are captured in full High Definition.

SFS Music Director Michael Tilson Thomas journeys to rural Bohemia to rediscover the inspirations of Mahler’s music, and traces Mahler’s life through the premiere of his first symphony in 1888. It shocked the contemporary audience, but as MTT and the San Francisco Symphony reveal, on location and in performance, this ground-breaking symphony contains elements of everything else that Mahler composed. From there MTT examines Mahler’s creative growth, from the 1890s to his death at the age of 51 on May 18, 1911, including his symphonies, the Rückert songs and Das Lied von der Erde. The documentary charts Mahler’s mercurial career as a conductor, from the Vienna Opera to Carnegie Hall in New York, as well as his tempestuous relationship with his wife Alma. At Mahler’s simple grave in a Grinzing cemetery, MTT explains why Mahler has so profoundly affected his own life. Shot on location in the Czech Republic, Austria, New York, and in performance in San Francisco’s Davies Symphony Hall.

Disc 2
Mahler: Symphony No. 1 in D Major in Concert

Michael Tilson Thomas and the San Francisco Symphony perform Gustav Mahler’s Symphony No. 1, “Titan.” The program was taped as part of the SFS’s Mahler Festival in Davies Symphony Hall in September and October of 2009.