Think "electric guitar plus symphony orchestra," and the heavy-metal blare of Metallica's S&M or the bombastic fusion of Emerson, Lake, and Palmer might come to mind.

This music doesn't take itself too seriously, and yet it's anything but lightweight. Or, to turn that statement around, Mackey is a kidder with an apparent fondness for scandalizing subscription-holders, yet his music is finely crafted and touchingly sincere. Michael Tilson Thomas is hip enough to understand this, and the young adults of the New World Symphony (a training orchestra based in South Florida) relish Mackey's consistently fascinating weirdness. The production and engineering team of Jay David Saks and Tom Lazarus add to this disc's unqualified success. 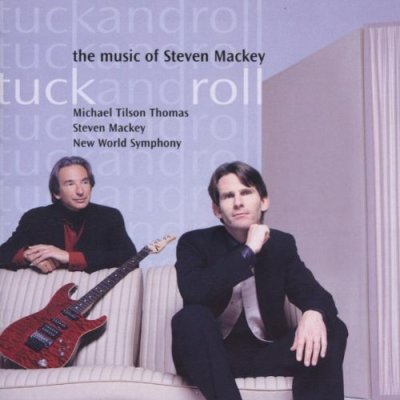 Steven Mackey’s Tuck and Roll is no crossover gimmick. Rather, it’s a contemplative, colorful, often serene, and sometimes witty four-movement concerto for electric guitar and orchestra that belongs in a concert hall, not a stadium. The solo guitar — expressively played here by the composer — and orchestra bounce ideas around in a conversational manner, finding more than a few subjects of disagreement. Tuck and Roll may not be the piece to convince your teenager that classical music is cool, but it should persuade some diehards to take the electric guitar more seriously.

The following work, Lost and Found, is a brief orchestral showpiece that could easily serve as the soundtrack to a zany, imaginary cartoon. But the highlight of this disc is Eating Greens, a wide-ranging, seven-movement suite whose title was taken from a painting by Margaret Leonard. Mackey’s inspired wackiness is given free rein in “Waffling,” with its hilarious quotation of a well-known Christmas song. “Whim and Rigor (Homage to Henri Matisse)” is stark and strangely beautiful — a miniature masterpiece. And the concluding “Drunk Monk (Homage to Thelonious Monk),” with its lurching rhythms and winking discords, is one of the most original musical tributes this listener has encountered in many a year. Guided by their conductor, Michael Tilson Thomas, the young musicians of the New World Symphony play Mackey’s music with all the bold assurance and waggish imagination it deserves.