Beethoven: Leonore Overture No. 3, Symphony No. 7

Michael Tilson Thomas and the San Francisco Symphony present a hybrid SACD recording of Ludwig van Beethoven's Symphony No. 7 and Leonore Overture No. 3.

These live recordings of Ludwig van Beethoven's Symphony No. 7 in A major and the Leonore Overture No. 3 represent the orchestra at its best, playing with absolute clarity of tone colors, lines, and textures, and with true unity of purpose, while Tilson Thomas' interpretations are characteristically lucid, well-balanced, and buoyant. 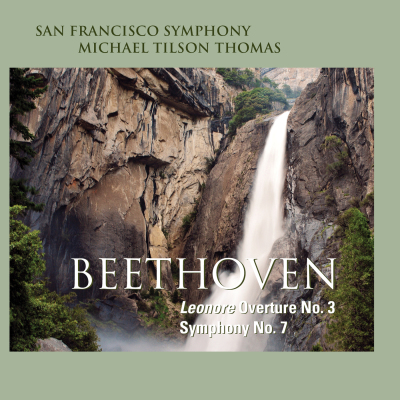 This release from Michael Tilson Thomas and the San Francisco Symphony features Ludwig van Beethoven’s Symphony No.7 coupled with the Leonore Overture No.3. One of his most stirring works and also one that he considered among his best, Beethoven’s Symphony No.7 was immensely popular from its first playing. Recently, its powerful second movement was used to great dramatic effect in the seminal moments of the Oscar-winning movie The King’s Speech. While Beethoven wrote only one opera, he wrote multiple overtures for it, and the third of the series fully captures the joyful outcome of the story. Both recordings were taken from live in concerts held at Davies Symphony Hall in San Francisco.

This album continues MTT and the SFS’s ongoing exploration of the music of Beethoven. Previously SFS Media released Beethoven’s Symphony No. 5 and Piano Concerto No. 4 with Emanuel Ax. MTT also led a journey through Beethoven’s music in Keeping Score: Beethoven’s Eroica.