Michael Tilson Thomas presents "The Thomashefskys: Music and Memories of a Life in the Yiddish Theater."

In everything he does, from conducting the San Francisco Symphony to spearheading that orchestra’s multimedia educational project “Keeping Score,” Michael Tilson Thomas brings thorough musicianship sparked with theatrical flair. 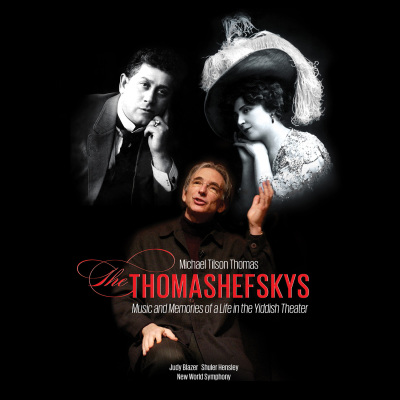 The Thomashefskys is a very personal project for MTT, celebrating the lives and theatrical and musical legacies of his grandparents, Yiddish theater pioneers Boris and Bessie Thomashefsky. Born out of a desire by MTT to preserve the music of the Yiddish theater, The Thomashefsky Project, founded in 1998, expanded from an archival role to these performances hosted and conducted by MTT and directed by Broadway veteran Patricia Birch. It features music reconstructed from the original Yiddish theater repertoire interwoven with projected images and stories from Bessie and Boris’s lively memoirs. “My grandparents became mega-stars and found themselves smack in the public eye,” says Tilson Thomas. “They were subject to adulation and relentless scrutiny. Legions of crazed fans were obsessed with every detail of their work and their lives.” The stage version of The Thomashefskys has been performed to sold-out houses in New York, San Francisco, Chicago, Los Angeles, Philadelphia, Miami, and at Tanglewood in Massachusetts. The San Francisco Chronicle said, “Thomas and his collaborators do what Yiddish artists always meant to do.  They make you forget your troubles for an evening, plunge into another world and feel your own more fully in the end.”

Recorded in April 2011 at the Frank Gehry-designed New World Center in Miami Beach, the performance of The Thomashefskys is written and hosted by Michael Tilson Thomas and stars Judy Blazer as Bessie Thomashefsky and Shuler Hensley as Boris Thomashefsky. It also features Ronit Widmann-Levy and Eugene Brancoveanu and the New World Symphony, and is directed for television by Gary Halvorson.