The Clarinet Concerto (also known as the Concerto for Clarinet, Strings and Harp) came out of Copland's most fertile time. It was commissioned by Benny Goodman in 1947, and had its debut performance by him in 1950. It has the polish of a composer at his prime. In fact, Copland wrote very few major works after this concerto.

The structure is simple; a slow movement follwed by a fast movement, linked by a cadenza. The first movement is labelled "Slowly and expressively" and has hints of Latin America, where Copland drew his inspiration.

Stoltzman's clarinet rises laguidly over the strings and harp. This is sweet, poignant music, beautifully played. The cadenza for the solo clarinet is sharp and technically demanding, a virtuoso piece, and Stoltzman plays it with relish. It provides a bridge to the contrasting final movement, a lively, jazzy piece, again with Latin American influences. 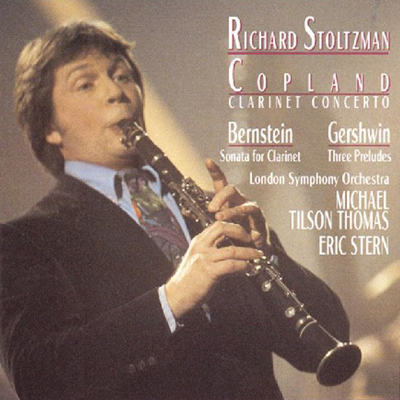