Concertos have played a crucial part in the evolution of Dominic Muldowney's orchestral music, from the works for saxophone and piano written in the early Eighties to the Trumpet Concerto first heard last year. The Oboe Concerto, premiered in 1992, is less ambitious in scope than some of its predecessors, particularly the big Violin Concerto from three years earlier that urgently deserves a recording too. Laying aside the complex explorations of tempo relationships and rhythmic layering that have dominated Muldowney's recent music, the Oboe Concerto is essentially an instrumental song cycle. It was written especially for the LSO's principal, Roy Carter, who plays it wonderfully well on this recording. A series of rapt melodic effusions, the 'songs' are separated by sharper-edged percussion interludes; they trace out a musical path that becomes ever more lyrical and extroverdy emotional. In Muldowney's music the boundary between what is popular and what is 'art' music has always been a deliberately fuzzy one, and nothing treads that fine line more judiciously or deliciously than this concerto. 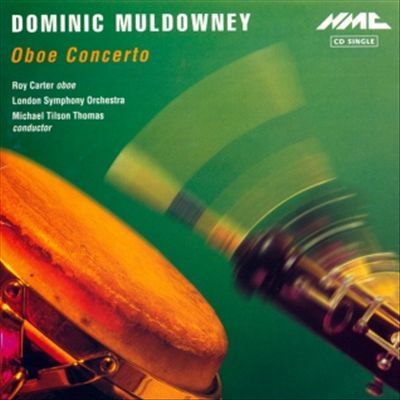