Now you can enjoy the complete concert performances of the works explored in Keeping Score, including Tchaikovsky’s Symphony No. 4, Beethoven’s Symphony No. 3, Stravinsky’s Rite of Spring, Copland’s American Sound, Berlioz’s Symphonie fantastique, Ives’s Holidays Symphony, and Shostakovich’s Symphony No. 5.

...charismatic musical evangelism … genuinely fresh ideas about the presentation of classical music to a mass audience. 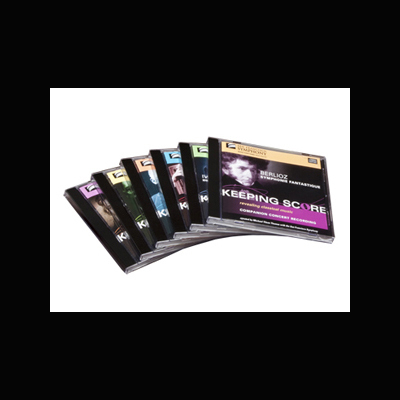 This special set of 6 CDs includes:

While Russian audiences cherished the symphony from its inception, many Western critics derided it as a hollow concession to political pressure. But time and distance have made it abundantly clear that the Fifth panders to nobody and speaks to all people, at all times, and in all places.

This companion concert recording for Keeping Score: Shostakovich Symphony No. 5, as seen on PBS, was recorded live in Davies Symphony Hall in November 2007.

Folk music played an important role in shaping the musical styles of both Aaron Copland and Charles Ives, a pair of American originals—one French-trained, the other stubbornly home-grown—who are both noted for weaving alluring sonic tapestries of American life. For New Englander Ives, the key to authenticity lay in a kaleidoscopic pageant of tunes, dances, evocative sounds, and wildly unorthodox harmonic idioms. The Holidays Symphony, beginning with “Washington’s Birthday” and ending with “Thanksgiving,” occupied him on and off for more than fifteen years.

This album is the companion concert recording for Keeping Score.

The 24-year old Hector Berlioz, happily enrolled at the Paris Conservatory after a desultory sojourn in medical school, fell madly in love with Irish actress Harriet Smithson. The real Harriet found him offputting, yet Hector’s persistence won out and the two were married in 1833, despite their obvious incompatibility. But before the wedding bells came a period of anguish for the hypersensitive young composer, who in 1830 poured his yearning and frustration into the programmatic Symphonie fantastique, telling of a morbidly amorous young man’s fatal attraction to an idealized young lady.

This companion concert recording for Keeping Score: Berlioz’s Symphonie fantastique, as seen on PBS, was recorded live in Davies Symphony Hall in December 2007.

“On its very first page Beethoven threw his hat into the ring and laid his claim to immortality.” Thus H. L. Mencken on the Third Symphony. But there’s a big hole in that very first page, put there by a boiling-mad composer as he brusquely scraped off the dedication to Napoleon in response to the erstwhile First Consul’s having been proclaimed Emperor in May 1804.

This companion concert recording for Keeping Score: Beethoven’s Eroica, as seen on PBS, was recorded live in Davies Symphony Hall in May 2004.

Stravinsky’s early ballets The Firebird and The Rite of Spring are soaked in the folklore of the Russian people. Parisian arriviste Stravinsky, collaborating with flamboyant impresario Sergei Diaghilev and his Ballet Russes de Monte Carlo, brought out The Firebird in 1910. Supercharged with bewitching melodies and luscious orchestration, it established Stravinsky as the rising star of the Paris music scene. A few years later came The Rite of Spring and the audience riot that disrupted its premiere (“just what I wanted!” crowed Diaghilev.)

This companion concert recording for Keeping Score: Stravinsky’s Rite of Spring, as seen on PBS, was recorded live in Davies Symphony Hall in September 2004. It includes the complete The Rite of Spring plus three movements from The Firebird Suite (1919 version).

It was during the emotional wreckage of his (unconsummated) marriage’s aftermath that Tchaikovsky put the finishing touches on the Fourth Symphony. Precisely how that mental turmoil ultimately shaped the symphony remains a matter of conjecture, but clearly the Fourth represents a watershed in Tchaikovsky’s symphonic evolution, as he brought the innermost secrets of his psyche to a genre traditionally associated with the logical development of musical ideas within established structural principles.