[This performance] has the right balance of line and harmony, the right feel for mass and momentum, the right sense of being in and of the moment, and above all, the sheer audacity to pull off the whole mighty and monumental work. 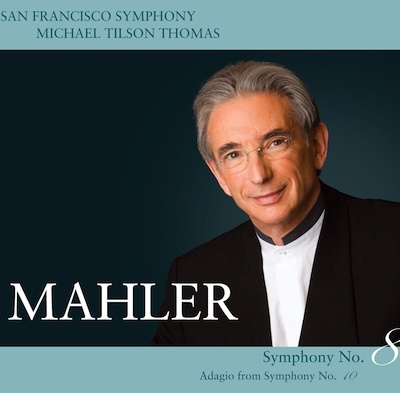 In the Seventh Symphony, Mahler was pursuing strategies of discontinuity – harmonically, polyphonically and schematically – notably in the last movement. So with this mastery of turning on a dime fully at his command, now he sets off to write this big new piece. The big problem with the whole piece is that the forces are so vast that it’s very easy for it all to become quite thick and quite fat. Considering the wonderful, mercurial wit and humour, this is the kind of piece that requires rapier thrusts, whereas the actual forces you have to work with are more like a blunt instrument.

The first movement is a big exposition, including perhaps the longest, most continuous burst of up-tempo music Mahler ever wrote. The imagery is of cloudscapes and bursts of light and little ensembles of heavenly hosts. There is one slower, more dirge-like contrast with sly, expressive violin solos but this burst of exultant energy is combined with contrapuntal mastery that makes it extraordinary to think Mahler once admitted he hardly ever turned up to his counterpoint classes and just squeaked by with passing grades. In this movement, the challenge is to get this wonderfully inspiring and entertaining music, so inherently full of surprise and brilliance, to sound with enough clarity and enough shape. You have to lighten things up and balance them very carefully. Otherwise you lose the wonderful way the vocal group is used to create very particular colours and the organist underscores certain, craggy themes. There is a quality of astonishment, too, as each key area is introduced – harking right back to those dramatic modulations in the First Symphony.

The piece proceeds through an astonishing coda, in which the tempo doubles. It’s important the first movement should end with that breathless feeling, because we are about to turn a corner into another language altogether, with a remarkably restrained and extremely mournful, simple little tune in the winds, which is duly transformed into the radiant, major-key power of the Chorus Mysticus at the end. The harmony here is pungent, with little shades of nuance the players must achieve without upsetting the overall mood of hushed sadness. Then there is a sudden outburst of sound, with the orchestra playing absolutely full out, especially the horns, the cellos and others in the middle range of the orchestra. The mood is reminiscent of the raw emotion in parts of the slow movements in the Fourth and Sixth symphonies and we are on the road to the ‘Abschied’ in Das Lied von der Erde.

Then we have all the high jinks. If you want to appreciate fully the wry genius of Mahler in approaching this text, you just have to compare this with Schumann’s reverential, lyrical setting of the same words. Mahler observes this with all the observational skill of a genre painter. Pater Ecstaticus is this great, enamoured, swashbuckling character, then Pater Profundus is the nearest thing Mahler ever wrote to a Wagner villain role, very much in the Alberich or Hagen mould. There’s great wildness in the music. Then we are into the first appearance of the angels and a kind of street music. These are not delicate little choristers he’s asking for here – these are really street kids, taunting us with edgy irreverence. The music in this section is full of humour. It’s like a game, full of frothy laughter and, after the angels and all the tremolos and trills and the sense of an electric, atmospheric event, comes Dr Marianus. This is a classic example of where many performances go off the rails, because it’s clear from Mahler’s markings that, whatever tempo you’re at as you come out of the angel ensemble, you must slow down gradually to the final hymn of Marianus (‘Jungfrau…’). That leads us beyond the realm of words and into the ‘Ewig Weibliche’ theme, with harmoniums and harps. It is the most daringly sentimental evocation of salon music he ever used.

Then we come to my favourite part of the piece – the ensemble with the great sinner ladies. Suddenly we are up a mountain, at a tea party with these three martyr ladies – these three old broads, who obviously get together regularly and reminisce about their wonderful old days of suffering. The twinkle in the music tells us their memories are predominantly happy – oh, remember those jackals? – and they sing a spectacular canon. It’s so charming and they are so enjoying one another’s company. Then comes Gretchen, bright and innocent, with another clear instruction to sing quietly and affectingly. This symphony mustn’t degenerate into a Schreifest. Ultimately the message of the piece is that the majesty of this simple girl’s love matches the entire majesty of Heaven.