The Ultimate Mahler Collection on Vinyl

"The discs, originally recorded in DSD and released on hybrid-stereo and (tasteful, even convincing) multichannel SACDs, were generally excellent sounding, with a rich tonality, wide and deep soundstaging, and terrific dynamic scaling and extended range. Not only have these qualities translated beautifully to vinyl, they actually, perhaps even surprisingly, sound better than ever." 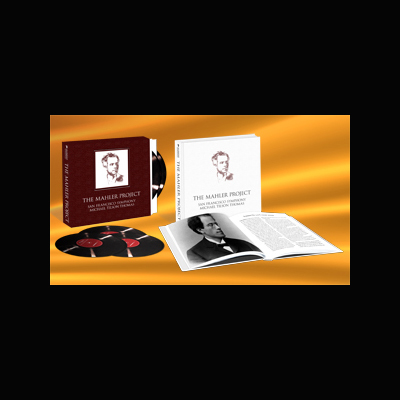 A LIMITED EDITION of the Grammy® Award-winning series.

A SPECIALLY DESIGNED AND NUMBERED DELUXE BOXED SET
This incredible collection will be pressed on vinyl one time only.

“This has been a landmark Mahler cycle… there’s now no better orchestra in the U.S. than Tilson Thomas’s SFS for Mahler. If you’ve not yet sampled the cycle… just pick your favorite Mahler to start. But do start.”

The deluxe 22-LP set is the capstone of the seven-time Grammy® Award-winning and five star Diâpason d’Or Mahler Cycle recorded live at Davies Symphony Hall from 2001-2009. The series, released in individual installments on Hybrid SACD, was a commercial success and was lauded with critical acclaim. This one-time only offer will be limited to 500 individually numbered sets. The first 250 sets will be signed by Michael Tilson Thomas.

We are pleased to announce that the San Francisco Symphony has received a confirmed pressing date from our vinyl manufacturer in Austria for creating the Mahler Recording Project Vinyl Box Set. It will go to press on November 15 and immediately following the pressing all twenty-two 180g virgin vinyl discs + the bonus 45 rpm discs that comprise the box set will be hand-assembled into individual sleeves and a collector’s edition box. We anticipate delivery to our customers 4-6 weeks from that date. We thank you for your continued support and enthusiasm for the project and for the artistry of Michael Tilson Thomas and the San Francisco Symphony and greatly value your patience with this very specialized process.  We hope you will be as thrilled with the results as we are.

This 22-LP set is the capstone of the seven-time Grammy® Award-winning Mahler Recording Project, recorded live at Davies Symphony Hall from 2001-2009. The series, released in individual installments on Hybrid SACD, was a commercial success and lauded with endless laurels of critical acclaim.