He (Michael Tilson Thomas) conveyed the dance soul in the score. And its Ravelian color. The playing was sleek and polished. Dynamic contrasts, impossible to achieve on a Broadway stage, made "One Hand, One Heart" stop time. The Ballet Sequence, with "Somewhere" as the centerpiece, became a grand occasion, showing off startlingly impressive percussion writing on the level of Varèse and even Cage. 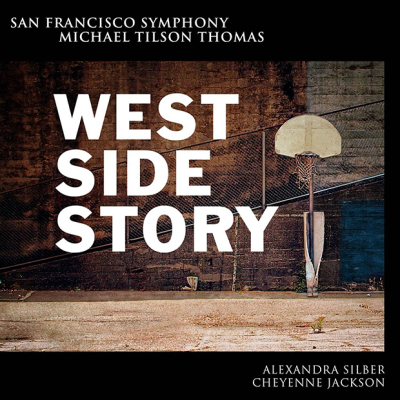 The recording boasts a talented cast of Broadway actors led by Alexandra Silber (Maria) and Cheyenne Jackson (Tony) alongside members of the San Francisco Symphony Chorus. This Collector’s Edition 2-Disc Set includes a 100-page booklet featuring a new interview with MTT, notes from Rita Moreno and Jamie Bernstein, as well as a West Side Story historical timeline, archival photographs, complete lyrics, and rehearsal and performance photos. Presented in a High Definition Premium Audio Hybrid SACD* Set, this must-have album is the latest treasure from the Orchestra’s very own SFS Media label.

The performances were recorded live at Davies Symphony Hall in late June and early July 2013 after Michael Tilson Thomas and the San Francisco Symphony became the first orchestra to receive permission from all four West Side Story rights-holders to perform and record the musical score in its entirety in a concert setting. Of the new recording, Michael Tilson Thomas said, “This is a new and rare opportunity to hear Bernstein’s complete score sung by a sensational young cast and a knock-your-socks-off orchestra. The San Francisco Symphony totally understands and feels this music. We show the Broadway roots of the piece and how its universal qualities translate into the way we think about it today.”